Last Friday Jaume Ferrer presented his Phd. Thesis,  an empirical study of the relationship between designers and users expectations and experiences in the context of the design of interactive technologies.
Jaume undertook an ethnography approach on the development of a “mixed reality” device. This device was proposed by their designers as a tool to promote health and physical activity and sociability among children. This technology project is framed within the Interactive Playgrounds and exergames, characterized by the development of interactive technology related to playful physical activity. The fieldwork took place between 2008 and 2011 in the Interactive Systems Laboratory of the Pompeu Fabra University, at Barcelona, and it was focused on the Interactive Slide, a full-body, multiuser, non-invasive interactive experience composed by a large inflatable slide that were augmented with interactive technology.

The thesis explores the agency of designers, users and devices interacting together and forming processes that go beyond the production of a finished object. It also shows how the design of interactive artifacts is not only the development of a technology but also the configuration of a context of use where social processes among humans and non-humans, play a decisive role. The proposed vision of (co)design opens a critical view at how we currently understand design processes and stakeholders. Jaume argues that in interactive design the experience of users include the experience of the designers and that the non-human components play also a significant role in how the artifact evolves. As a designer himself, this PhD dissertation explores new ethnographic paths as he became a maker during the fieldwork, showing that the traditional participant observation and descriptive methods can be enhanced by developing adhoc ethnographic devices such as making and shaping technology oneself to understand what is not always visible and observable in technology design. Moreover, the ethnographic research is also a dialogue between researchers and stakeholders in the design process that continues after the fieldwork, transforming the vision of the designer about the design process itself. 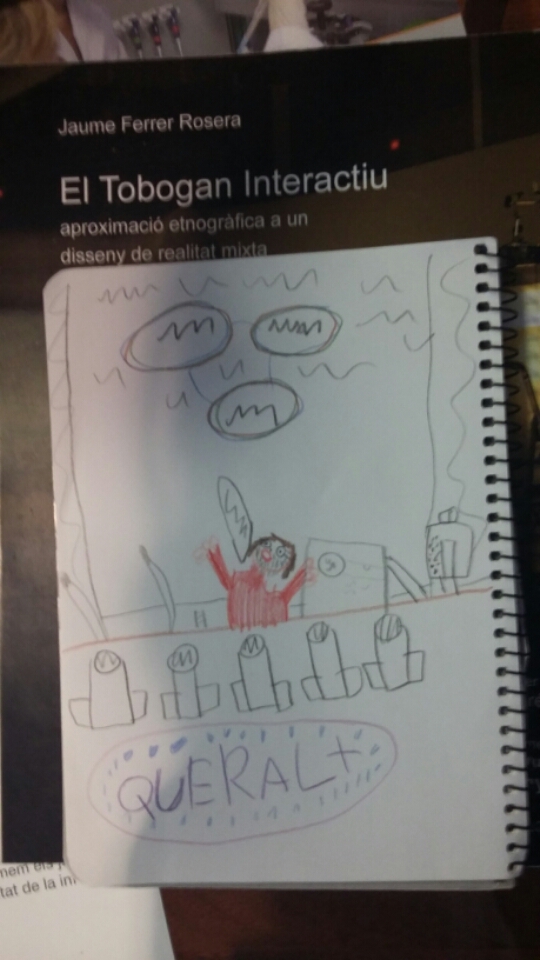 Jaume Viva Voce as captured by his little daughter Queralt.